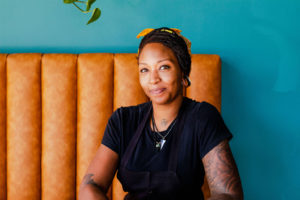 Chef Almitra (Mimi) Williams was raised in a small, rural town in Northern California, where she early on developed a deep appreciation for nurturing the community with fresh food straight from the earth. At the age of six, Mimi stepped up to the stove to replace her mother’s failed attempts at cooking and was met with gratitude from her 8 siblings and parents. She credits her path to a professional career in cooking to her father’s fearless approach to food and steadfast belief in her culinary talent.

Midway through her cooking career and while pregnant with her daughter, Mimi discovered she could no longer consume meat. She welcomed the challenge to recreate her favorite dishes using plant-based ingredients. What Mimi loves most about vegan cuisine is the ability to transform simple ingredients from the ground into beautiful, nourishing, and comforting food. Mimi brings over a decade of experience working in well-respected kitchens across America and her insatiable wanderlust largely influences the rich and colorful flavors found in the food at Counterpart.

Mimi believes that all people should have access to food that is good for the body and good for the earth. She nourishes our Echo Community by bringing fresh food to the homeless camps in Echo Park daily. To support Mimi’s mission, you can sign up to volunteer or donate to Feeding America

Copyright © All Right Reserved by counterpart